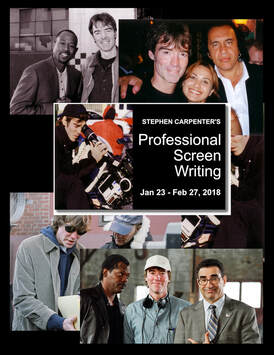 Mr. Carpenter, in this intensive six week class, will demystify the craft of screenwriting, drawing on the expertise he’s gained over three decades working for every major Hollywood studio. 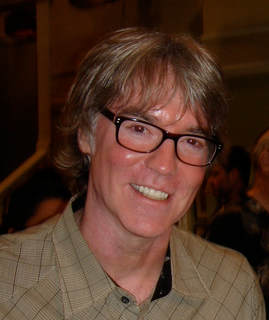 PROFESSIONAL SCREENWRITING COURSE OUTLINE​
MR. CARPENTER will explain in detail the classic three-act structure using examples from film and television, including his own work.
The thrust of the class is to lay out in simple terms a how-to guide to develop practical tools to structure your screenplay from beginning to end, how to create a rise and fall in action, how to escalate this rise and fall and then resolve it.

CHARACTER & DIALOGUE
The course will provide detailed instruction on how to create a compelling character, the distinction between a proactive hero and a reactive hero, the effectiveness of action over dialogue, and the use of silence for effect.
Further exploration will reveal the craft of physical descriptions of characters that form an image of the character in the viewer's mind, including some tricks of the trade (i.e., describe your character in such a way as to invoke a certain bankable star without explicitly stating their name). Conversely, how to AVOID invoking a certain star to keep casting options open.
Gender and role reversal will be discussed, as well as the power of audience identification with your character, the impact of a compelling antagonist, and how to avoid common mistakes (i.e., making the villain more compelling than the hero).

BEYOND THEORY
Examples of film and TV will be dissected in detail by Mr. Carpenter, to illustrate every single point of narrative technique. In addition, all members of the class will be asked to submit at least one of their script ideas to the group for discussion and analysis.

LAST BUT NOT LEAST
Mr. Carpenter will give specific instruction on how to find an agent, how to create an effective logline, and how to pitch it.  There will also be intense focus on how to get your screenplay produced, and how to deal most effectively with the Hollywood machine.

THROUGHOUT THE COURSE:
​There will be a period at the end of every class for Q & A and freeform discussion.  Mr. Carpenter will answer every question to the best of his ability, using both theory and his own experience, including how to work with a difficult actor, director, producer, studio, agent, etc.  How to START writing, the myth of “writer’s block,” and how to remain sane and focused…and, most important, how to FINISH your screenplay, and never give up.