It’s New Year’s Eve 1992.  With a dreamlike plot film-obsessed Danny Fleming is watching an old movie at the video store where he works. When he wanders into the back room, Meredith O'Connor appears at the window then sneaks in and hides behind a rack of tapes in order to jump out and surprise Danny.  These two haven't seen each other in 20 years, since they were in eighth grade. Danny's dreams of being a writer are all but forgotten and Meredith's two decades as a nun have taken a different direction; for Meredith it’s reminiscent of Maria Von Trapp and for

​Danny it is making a big splash owning his own cinema. What hasn’t changed is the past---when they were in eighth grade.
Featured in this heartfelt love story are local actors Timothy Benson and Sarah Alida LeClair with direction by Jerry Pilato and technical direction by Jay Maloney.

The Cast
About the Director 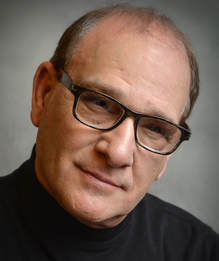 Jerry Pilato - Theatre Director
Jerry comes from San Antonio, Texas where he was Artistic Director for The Actors Theatre of San Antonio from February 1982 to 2005.  He graduated from Toul American High School in France and  attended San Antonio College and the University Of The Incarnate Word in San Antonio.  Locally he has directed The Foreigner, Love Sex And The IRS and Biloxi Blues at The Sunshine Brooks Theatre in Oceanside; Four Dogs And A Bone, The Eight: Reindeer Monologues, Orange Flower Water and Glenn Garry Glen Ross at Compass Theatre (6th@ Penn)  in San Diego; Plaza Suite, Visiting Mr. Green, Weekend Comedy and The Cemetery Club at The Broadway Theatre in Vista, at Lamplighters Theater The Hallelujah Girls, Stage Fright , The Dixie Swim Club and Daddy’s Dyin’ Who’s Got The Will.  He has been awarded Best Director awards from the Alamo Theatre Arts Council,  in San Antonio for Chicago, and When Pigs Fly (Musical), I Hate Hamlet and First Night (comedy), American Buffalo, If We Are Women and Taking Sides (drama).  Artistic Director for Different Stages/San Diego he has directed : The Dixie Swim Club, The Psychic, Vampire Lesbians Of Sodom,  MOMologues, Race, Last Train To Nibroc, Lone Star Laundry and Bourbon and  Santaland Diaries/Season Greetings.  Also for Different Stages/San Diego he has produced Somewhere In Between, Burn This, The Sea Horse, Wrinkles, American Hero and The Brothers Lipschitz.